The Truth in the 12 Worst Hypnosis Myths:

Hypnosis is associated with magic, the supernatural, or the work of the devil.

Basis #1: Results of hypnosis appear magical. (My client who came to quit smoking proclaimed on this second visit: “It’s like magic! I haven’t had or wanted a cigarette since our session. I don’t understand it! How can it be that I am no longer interested in cigarettes?”)

Basis #2: Results of hypnosis cannot be adequately explained by material-based science because hypnosis involves the sub-conscious mind, and the mind is more than the physical brain.  What we cannot totally explain by science is often considered “beyond the natural laws” (as we understand them) or “supernatural.”  (Remember that Galileo Galilei was condemned of heresy by the Inquisition in 1615 for stating that the earth is not at the center of the universe and that it moves around the sun).

Fact: Hypnosis is a natural human state experienced by everyone. It has been extensively studied scientifically. Although we still don’t understand much about the mind, we do know how to focus its powers to get results through hypnosis. Hypnotherapy is based on many years of clinical research and documentation by famous psychologists.

A hypnotist is a person who has mysterious or unusual magic-like powers.

Basis:  What we don’t understand appears magic-like to us.

Fact: A hypnotist does not possess any unusual powers.  Hypnotherapists are not psychics, magicians, palm-readers, or claiming any “special powers.” The hypnotist has learned the science and art of effective communication with the subconscious.

Fact: The hypnotist knows that everyone hypnotizes themselves and that the trance state is a normal part of everyday life. We are entranced by music, by love, by art, by yoga, in meditation, in prayer, and in the boredom of freeway driving.  The hypnotist assists the person desiring transformation to communicate more directly with their subconscious to make the change desired.

Fact: Anyone can learn the skills and become a certified hypnotherapist with the proper training. (See how). The hypnotist may teach the person how to hypnotize themselves whenever they want, as we routinely do at Tooley Hypnosis (See self-hypnosis training schedule).

Hypnosis means being put to sleep or unconscious and not aware of your surroundings. It means a loss of control or being “OUT!”

Basis: Whenever we see a person being very still with their eyes closed, we think they are either asleep or unconscious, and hopefully not dead!

Fact: Hypnosis is not sleep or unconsciousness.  You are awake in an active state of heightened inner awareness where they can hear and speak to the hypnotist and continue to make choices and decisions.  It is an opportunity to “have a conversation with your subconscious.” Because you are so inwardly focused, you relax your muscles with closed eyes and your body is motionless.  Therefore if someone saw you, they might think that you were asleep or unconscious because that is usually the story when we see someone still with their eyes closed.

Fact: Sometimes a hypnotized person passes from hypnosis into sleep.  When this happens it is because the person is completely relaxed and wanted or needed to sleep.  They will awake very refreshed from the experience.

Fact:  Listening to a hypnosis audio recording at bedtime is a wonderful way to both reinforce your desired change and relax comfortably into sleep. I recommend it.

The hypnotist will be able to control my mind.

Basis: In entertainment hypnosis the volunteers do what the hypnotist instructs, even if it is silly things they would not ordinarily do.

Fact: No one can control your mind, unless you let them. Your hypnotherapist will give you suggestions that you want to be given, based on the information you provide during the interview in the first part of your session. At no point during your session will you lose control of your mind. You will remain free to decide to follow a suggestion or not, whatever you choose.  (See myth # 12 for a complete explanation of entertainment hypnosis).

A hypnotist can induce a person to commit a crime or something they consider immoral.

Basis: The book “The Manchurian Candidate” and the two political thriller films based on it (1961 and 2004) depict a person brain-washed (or hypnotized) to commit crimes when triggered by seeing the queen of diamonds playing card. Similar videos produced for entertainment revenue continue to attract an audience, and hence the myth is propagated.

Fact: Although a hypnotized person is highly open to suggestions, the person remains in control.  They are able to disregard any suggestions given to them if they do not want to accept them.  Normally a hypnotist does not have the power to make a person do something that goes against their will.  A person has to be willing to accept the suggestion for it to “stick.”  This is why hypnotists usually decline to work with smokers who really don’t want to quit. (I can’t help you if you don’t want to stop!)

Fact: Surrendering to a very domineering or unscrupulous personality can, however, result in a form of brain-washing if sufficiently repeated.  Remove yourself immediately if you sense this happening from any hypnotist, preacher, politician, telemarketer, or advertiser!

I will embarrass myself by revealing something I have kept secret. Hypnosis can get someone to “confess”.

Basis: “The silly actions of volunteers in entertainment hypnosis seem embarrassing.  If they do those embarrassing things under hypnosis, maybe I will too!”

Fact: Hypnosis for therapy is not hypnosis for entertainment. You will only speak about what is necessary to resolve the issue that you have chosen for hypnosis resolution. Your therapist doesn’t care what you may have done, and is bound to keep it confidential.  He is only there to help you achieve what you want, and has probably heard it all before anyway.  You can resolve issues by admitting to yourself the source without telling the details to the hypnotist.

A person in a hypnotic state may not be easily awakened and may remain in that state for a long time. Hypnosis is a dangerous experience.

Basis: Speculation that a hypnotized person is in a very deep, comatose state and that the action of a hypnotist is necessary to bring a person out of that state.

Fact:  “Awakened” is not the proper term, because the person was never asleep.  The hypnotist knows and uses the correct method to bring a person back from a trance state to “normal room awareness” at the end of the session.  Even if this were not done, the person will exit the hypnosis state naturally when they are ready.

Fact: There is no historical record of anyone ever failing to emerge from a hypnotic state!

Fact: As part of your self-hypnosis training, you will learn how to both put yourself into trance and how to bring yourself out of trance whenever you want. Hypnosis is very safe and is in fact, a state of hyper-awareness. My clients report hearing every little sound, but able to ignore them.  If there were an emergency, you would naturally be able to come out of the hypnotic state by opening your eyes, and stretching or speaking.

I can’t be hypnotized because my mind is too strong and disciplined.

Basis: Some people report that they tried hypnosis and they were not hypnotized.

Fact: Because hypnosis accomplishes change in the sub-conscious without active participation of the conscious mind, the conscious mind afterward is often unaware of the changes as they take place.  I have had clients who did not notice that their life had dramatically changed because it felt so familiar, natural, and effortless.  They became aware that what they had programmed under hypnosis was now occurring in their life only when a friend or family member called their attention to their changed behavior.  “Willpower” is not required because the sub-conscious easily implements the desired adjustment.

Fact: There is a spectrum of ease of going into hypnosis. Some people hypnotize themselves more easily than others.  If you can follow directions and are willing to be hypnotized, you CAN be hypnotized. Even if you are at the more difficult end of the spectrum, you can still be hypnotized; the hypnotist just has to work a little more at getting you hypnotized.  (I monitor the external signs of hypnosis in my clients to determine when they go into trance and continue to use appropriate hypnosis-inducing language until they do so.)

Fact: Hypnosis is a learned skill. You can learn to hypnotize yourself easily and accomplish many of the changes that you desire.  I teach my clients how to use self-hypnosis to achieve their goals. (link to self-hypnosis training)

I have never been hypnotized before.

Basis: You have never seen a hypnotist or hypnotherapist.

Fact: Every person naturally enters a state of hypnosis at least twice every day: just before falling asleep at night, and upon awaking every morning before getting out of bed. Formal hypnosis simply duplicates the relaxed, partly drowsy, highly-suggestible  state of those two times.

Fact: Most people easily enter a state of “environment hypnosis” while at the movies, watching TV, driving on the highway, or while reading a good book.

Fact: You were probably hypnotized by your parents for your first few years of childhood (until you figured out how to hypnotize them!)

Fact: If you are an athlete, you experience hypnosis as “getting into the zone.”

Fact: If you have ever been in love, that is the ultimate hypnotic state!

After hypnosis, I will have no memory of the session and won’t know what happened.

Basis: You don’t remember things from when you are asleep or unconscious.

Fact: Hypnosis is not an unconscious state or sleep. In fact, most people report having a heightened sense of awareness, concentration, and focus. You will have a conversation with me as your hypnotist during the session.  I will instruct you to remember everything.  You will get some reminders of the session to take home with you as reinforcements afterward.

Hypnosis is not effective or takes a lot of expensive sessions.

Basis: Many types of therapy take a lot of sessions, so hypnosis must take many sessions too.

Fact: Hypnosis is very effective.  Many hospitals use some form of hypnosis to prepare patients for surgery and assist their rapid recovery.  Hypnosis is THE most effective method of releasing the tobacco habit. (See the medical study LINKS for a large body of evidence on the effectiveness of hypnosis for nearly the entire spectrum of human experience).

Fact: Some issues can be solved with a single hypnosis session reinforced by personal self-hypnosis.  More deeply entrenched issues take a FEW sessions. 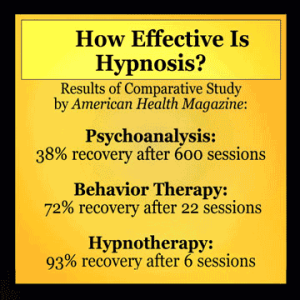 I will do embarrassing things, such as imitate a dog, chicken, or duck.

Basis: Observing entertainment hypnosis where the volunteers do these things when instructed by the hypnotist.

Now that you know better, utilize the safe power of hypnosis to get the life that you want.  You can repair your body, eliminate illness, add skills, drop useless habits increase your performance and joy.  Call me at 310-8321-0830 to discuss your challenge and make an appointment or register for a training class.

All My Pain Relief Tools in Easy-to-Use Paperback